The history of Austrian skiing is a cultural and economic history.

No other sport in Austria has contributed so much to the economic boom as alpine skiing. Ski instructors, the white Ambassadors of Austria, have always actively promoted and advertised the culture and beauty of the Austrian mountains worldwide.

Austrian ski history is dominated by, amongst others, skiing pioneers such as Max Kleinoscheg, Franz Reisch, Mathias Zdarsky, Colonel Bilgeri, Hannes Schneider, Toni Seelos, Prof. Stefan Kruckenhauser and Prof. Franz Hoppichler. It is thanks to our ski pioneers that since the early days of alpine skiing in Austria a standardised ski instructing plan has developed.

The ski school method has undergone far-reaching changes due to developments in skiing in recent years. Skiing has become snowsport. Snowboarding, cross-country skiing, telemark skiing, ski touring or new trend sports, stand next to alpine skiing as important parts of in the overall diversity supplied by the Austrian ski schools.

The road from skisport to snowsport is reflected in the snowsport instructor training. Training involves multiple sports, this means snowsport instructors are fully trained in a variety of snow sports equipment and are able to provide the ski school guest with a memorable winter experience. The Austrian ski instruction method incorporates important dynamics as much today as in the past, thus ensuring the rapid and strong upturn in snow sports worldwide.

The 2nd edition of the curriculum "Snowsport Austria - The Austrian Ski School - from entry to perfection in four stages", published in 2018, consistently continues on this path. What is new is the increased consideration of scientific findings in the areas of emotional and social competence. In the future, these factors will be essential for the success of snow sports teaching and thus the satisfaction of ski school guests.

The oldest illustration of a skier - a Stone Age hunter - was carved in stone on a Norwegian island 2,000 to 3,000 years ago. In 1861, in Telemark, Norway young men were observed performing "unusual feats" on their long planks, which was “strange” behaviour for that time. From descriptions it would appear that they had more of an Alpine than a Nordic character. However, when it was observed how fast these young men were getting downhill on their skis, did one start thinking of ways to move faster on flat terrain and thus the design of the skis, the bindings and the techniques were improved. So it is probable that this is the time that the first true cross-country skiing steps were developed. The modern cross-country skiing developed in Norway. The founders of this development were Sondre Auersen Nordheim and the world famous Fridtjof Nansen, who carried out his great Greenland and North Pole expeditions mostly with skis. Through Jansens fascinating book "The First Crossing of Greenland" the cross-country movement also came to Central Europe. The first major milestone of cross-country skiing in central Europe were the first Olympic Winter Games in 1924 in Chamonix. Many superior athletes showed the way forward in cross-country skiing and highlighted the fascinating birth of this "old" sport.

The great industrial revolution in the mid-19th century brought not only major economic upheavals but also led to a new evaluation of sports and leisure. After their often monotonous work, people crowded to the countryside to recuperate and to get fit "physically".

In 1888 a book was published by the Norwegian Fridtjof Jansen, in which he extensively described his Greenland expedition on skis, and so the first "ski boom" was triggered.

Soon skis were developed which were far better suited for use in alpine terrain as the original Norwegian model. 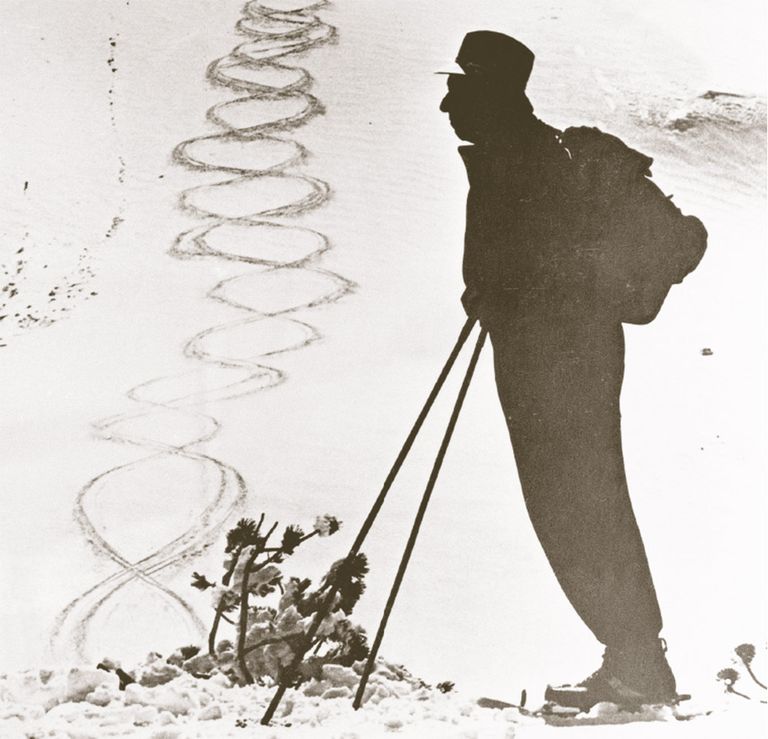 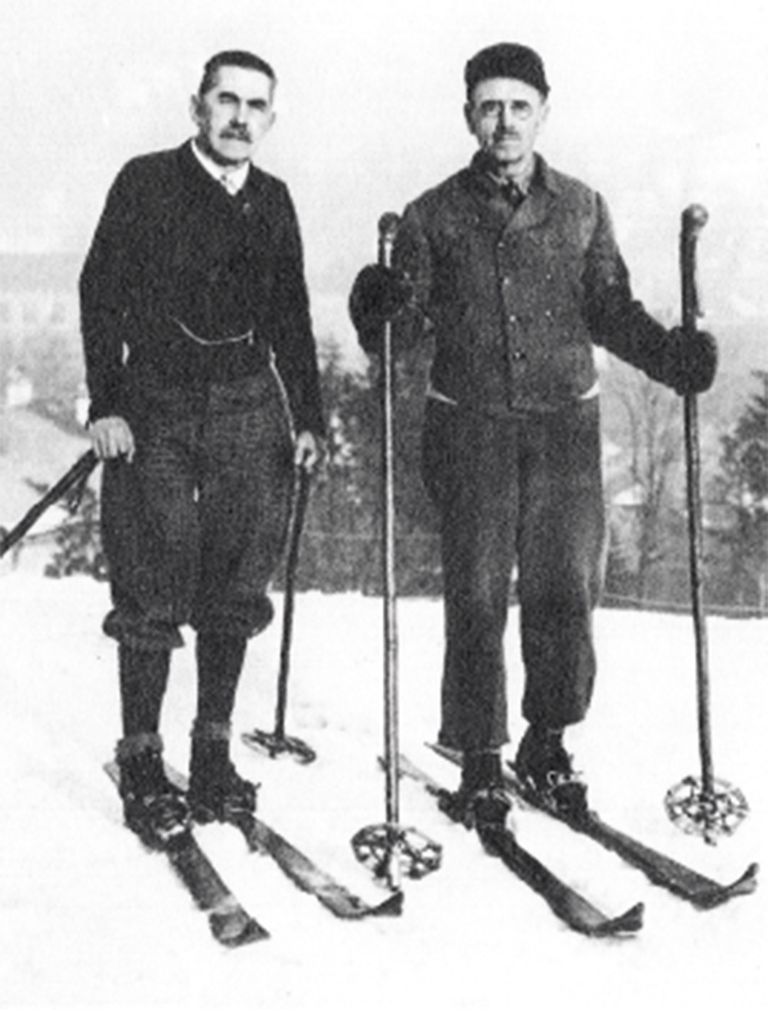 At the end of the 19th century the time was ripe for the development of ski equipment and skiing technique, adapted to the requirements of the Alpine terrain in Austria. This development was led by Mathias Zdarsky. Zdarsky developed the "Lilienfelder binding". This was the first stable binding that allowed the steering of the skis through lateral support. As a steering and braking aid, Zdarsky used a pole, the "Alpine lance". This new material permitted Zdarsky to develop a new skiing technique. In 1896 he published his ski instructors’ book “Alpine (Lilienfelder) Skiing Technique". Very soon the Austrian army also discovered the far-reaching significance of skiing. Colonel Bilgeri developed a ski with a groove, a new two-pole technique and a special method for movement in the snow, in order to allow the soldiers a safe ascent and descent in alpine terrain. Bilgeri’s textbook "Alpine Skiing" published in 1910 found great acclaim. So it is probably thanks to Colonel Bilgeri that after the year 1918 a large number of comprehensively and relatively uniformly trained ski instructors became available. 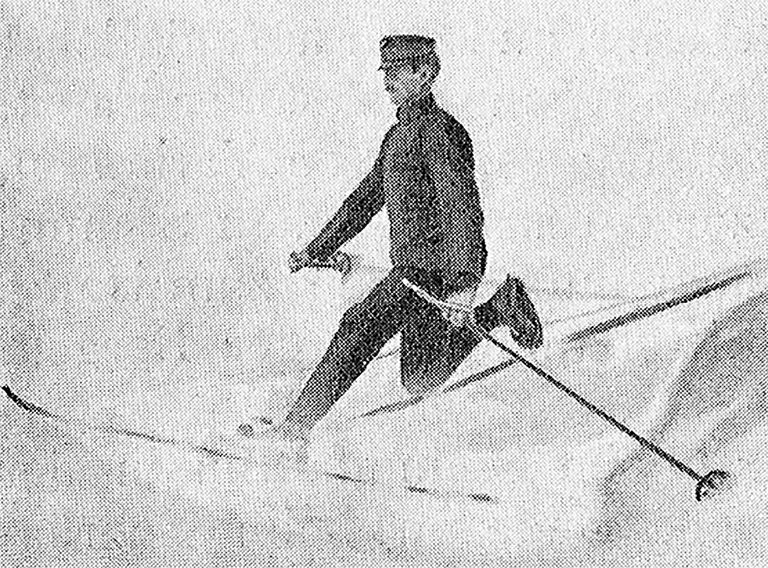 With the work of Zdarsky and Bilgeri the significance of methodically constructed ski courses for the growth of skiing is clear. There were several others. Viktor Sohm gave the first ski lessons in Stuben in 1905 and by the early 20th century ski lessons were offered in all major ski areas in Austria.

One of Bilgeri’s students was Hannes Schneider. Even as a 17 year old he was working as a ski instructor in St. Anton. However, he then had to enlist and he served under Bilgeri on the South Tyrolean front. On his return Hannes Schneider opened the Ski School Arlberg in 1921-22, teaching the so-called "Arlberg technique" characterised by schussing in the Arlberg squat position, stem turns, wide skiing, stem Christie and open Christie. 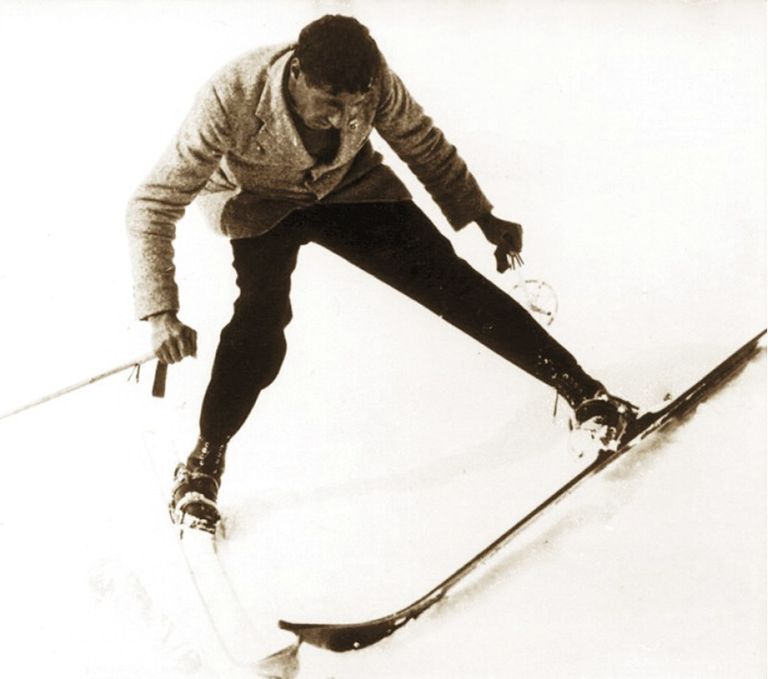 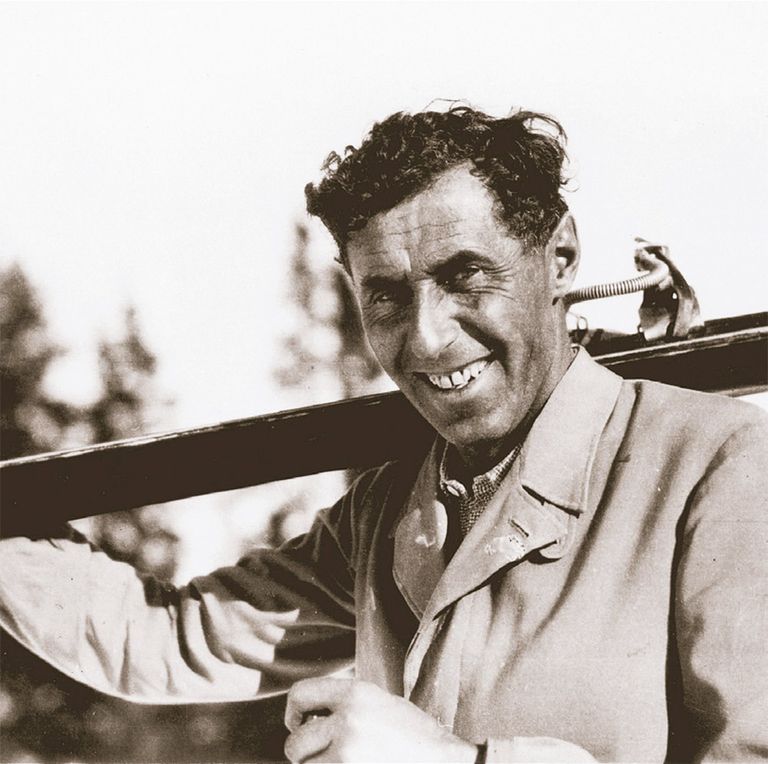 Following the end of the First World War, the first winter visitors came to Austria and several ski schools were founded. In the twenties Dr. Arnold Fanck`s famous ski book "The Miracle of Snowshoes" also appeared which created enormous publicity for skiing.

Through the reformation of physical education in Austrian schools, skiing was classified as "winter training" from 1922. In 1924 gym teachers had to undergo extensive training in skiing. As a logical consequence to the great demand for instructors, an attempt to establish uniform guidelines in extracurricular lessons emerged. Ernst Janner, gym teacher at the high school in Innsbruck and tutor at the gymnastics halls at the University of Innsbruck was entrusted with the first all-Austrian instructor training in St. Christoph a.A. During the First World War, he was with his ski guide company on a tour to the Wegmacherhaus next to the Hospiz in St. Christoph a.A. He immediately recognized the convenient location for skiing and started to renovate the house with his own resources. In 1924, under his management, the Ministry of Education took over the home. Janner published his first textbook "Arlberg School" in 1926. 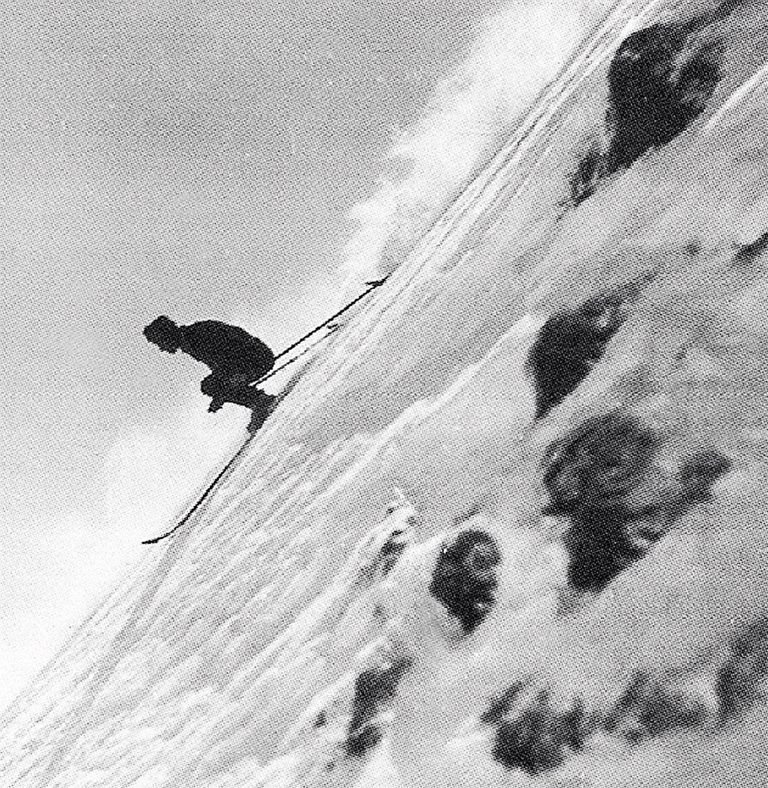 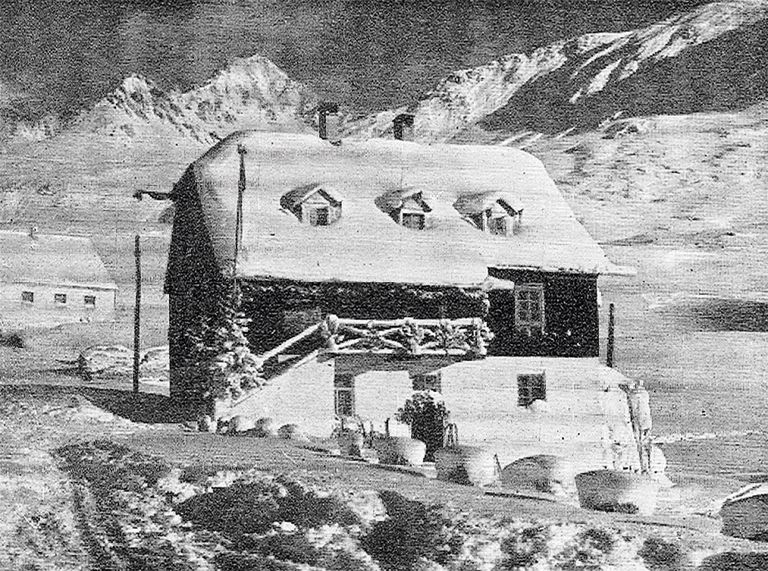 Rise and a Fresh Start

Rise and a Fresh Start

As early as 1945, the ski pioneers Rudi Matt, Toni Seelos and many others worked feverishly to put ski instructing and the ski school method on a new footing. Prof. Stefan Kruckenhauser attempted to make the long-buried tracks passable again and to solve the economic and organisational difficulties that arose.

In 1946, Prof. Kruckenhauser took over the leadership of the Ski Home in St. Christoph a.A.

Prof. Kruckenhauser also devised another revolutionary development in alpine skiing: from 1955 his "Wedel" technique spread to the whole world. In 1956 the "Austrian Ski Curriculum" was published and proved to be a bestseller that was translated into many languages. This curriculum was valid for 14 years but Kruckenhauser and his instructors were not idle during this time and marked the advancement of technology by monitoring the racers and finding their own solutions. All these technical developments and especially the "Wellen Technique" made their entrance in 1971 in the newly published "Austrian Ski Curriculum". It was published by the Austrian Professional Ski Instructors’ Association under its President Karl Koller. Franz Hoppichler was already working here. He took over the management of the Federal Sport Home Obergurgl in 1959 and in 1972 he took over the leadership of the Federal Sports Home in St. Christoph a.A., from his father-in-law, Prof. Kruckenhauser, which he established as a world centre for international ski instructor training. 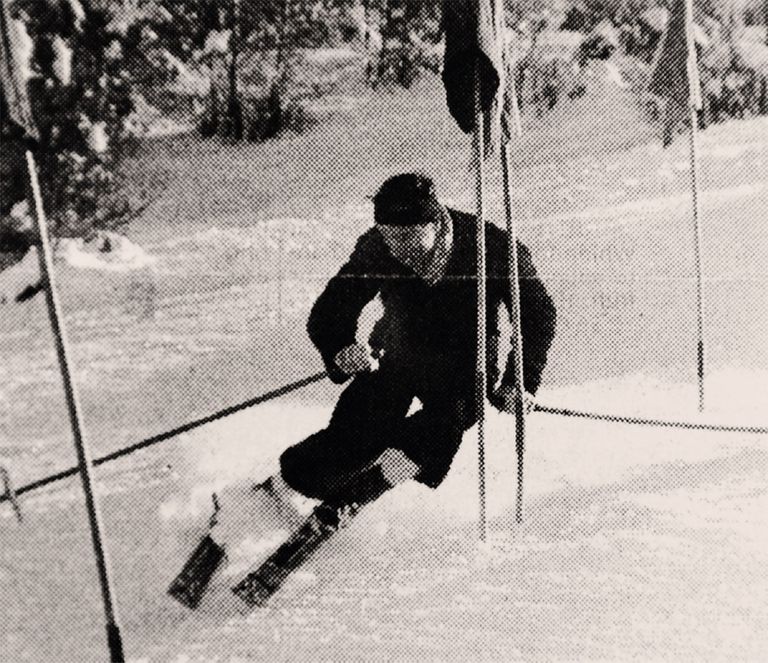 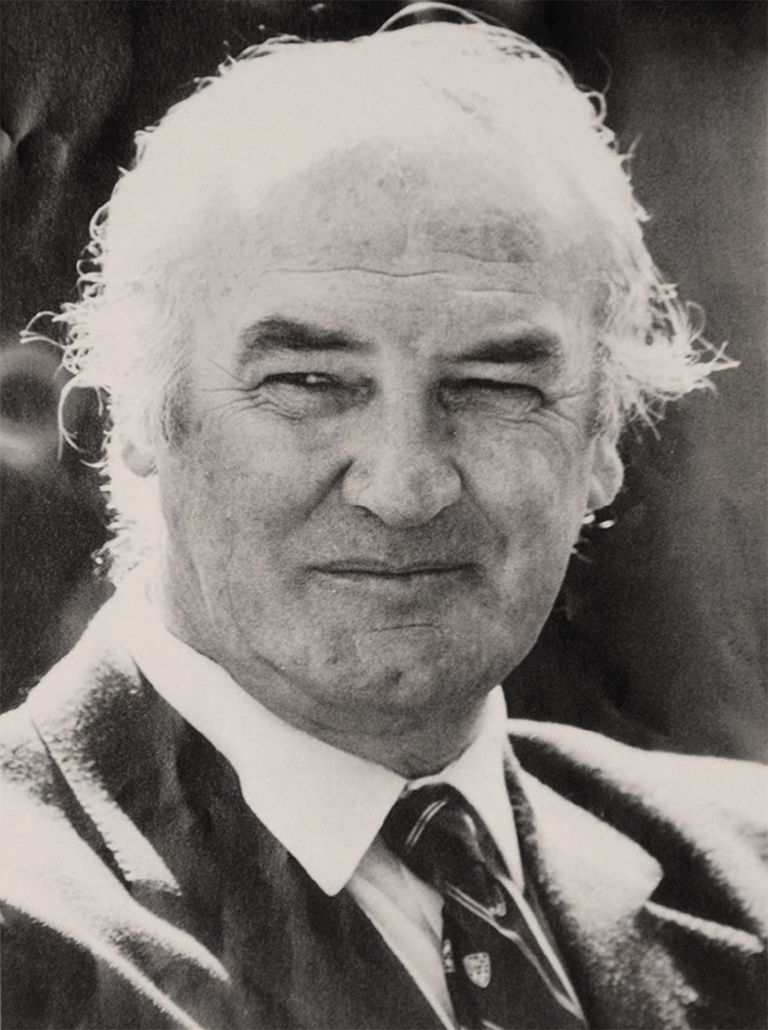 According to present-day knowledge, surfing was invented in Hawaii in the 10th century. In the 1920’s young farmers from the Sarajevo and Leibach regions, fascinated by this cool sport, attempted to slide down snowy slopes on converted barrel staves - similar to those of surfboards. However, one can only speak of snowboarding from the beginning of the Sixties when American surfers tried to bring the surfing feeling to the snow. Tom Sims, the most significant snowboard pioneer, built his first snowboard in 1963 from old boards, the so-called "ski board". It was approximately 90 cm long and bent at the front. A nailed down piece of carpet served as a standing surface. The way for a new sport was paved. Besides Sherman Poppen, Dimitrije Milovich and Jake Burton, Tom Sims is considered one of the founders of the modern snowboard. They were the driving forces making sure snowboarding dominated the ski slopes all over the world in the 80’s, giving skiing more and more competition - especially with kids and young people. The snowboard wave drifted over the Atlantic to Europe at the beginning of the 80’s and in record time took over European winter sports. It was a new, young scene which probably seemed crazy to onlookers. This fast-growing community in winter sports not only influenced the fashion on and off the slopes, but ultimately also the skiing techniques with carving, Park & Pipes and freeriding. 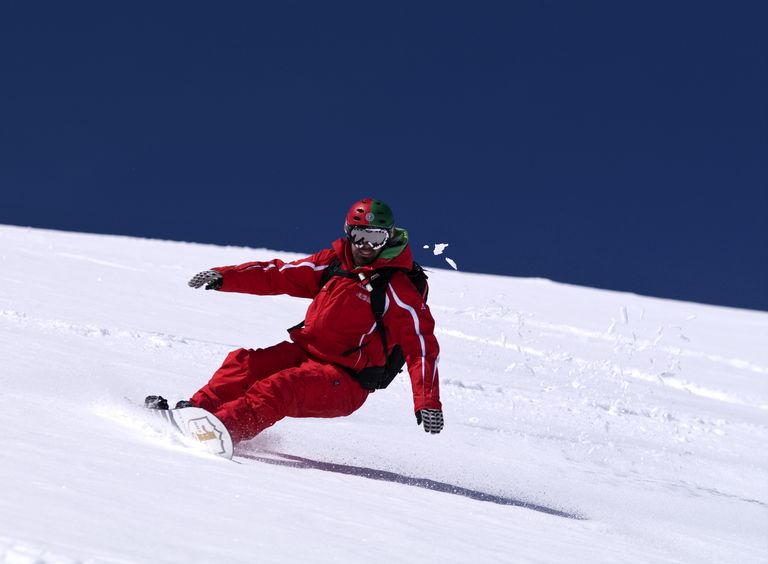